Our club is growing. On January 11th, 2016 we had the induction of our two newest members Mary Cones and Janate Moultrie at Denny's Restuarant.
Youth Appreciation 2016

Our 2016 Oratorical Winner is moving on to the Next Level
April 9th was a great day for Chandler Bodimer in the Oratorical Contest this last Saturday. He did a great job in his presentation and will be going to the next level.
Sue Lewis and Harold Der Garabedian (a FOO member) were there at the presentation. Chandler stood out among the participants. We wish him only the best.
Photo by Harold Der Garabedian
Respect for Law
We were extremely proud to honor two dedicated gentlemen who do outstanding work and contribute to the community through the Pinellas Sheriff's Police Athletic League (PAL). Kim Worthy had the pleasure of presenting the plaques to Joshua Bosse a Coach who was really surprised as it was kept a secret from him and Neil Brickfield, his Supervisor was also surprised too, because he had no idea that we were honoring him too. It was a great evening.

Supplies for Our 3 Sponsored Schools 2016
A shopping we did go, a shopping we did go - School starting up it was time to get some supplies for the kids that needed them. Also included in the purchase was two USB 8gb flash drives for each school to give to the teachers. 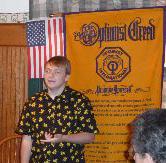 Chandler Bodimer Wins Oratorical Contest and Scholarship
Chandler did it this time and we are proud of him. This was his last chance to win because of age. He has compete in this for several years and got better each time. This was his year to win and he did it!
Chandler's Family (Mother, Grandmother, Chandler and Father)
Chandler's Speech 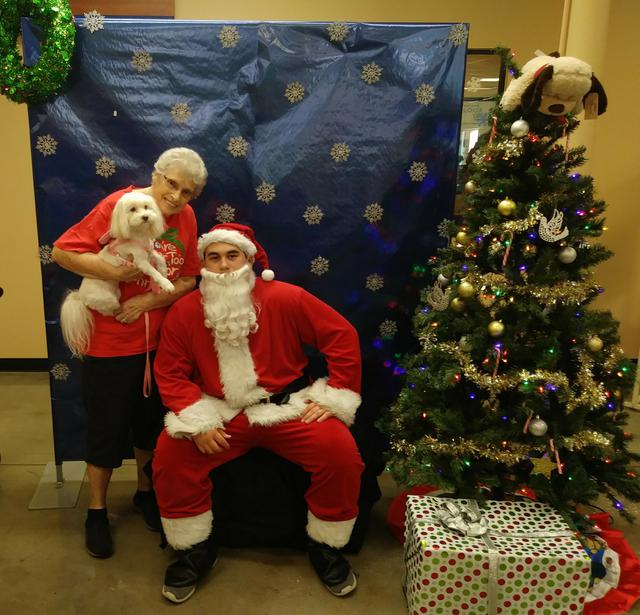 Member Nora Bourgeois and little Jeanie visiting Santa Claus at Pet Smart for Christmas. A great way to celebrate for both of them.
Celebrating Christmas

Celebrating our 94th Anniversary
We were honored to have the Optimist Clubs come out to help us celebrate our 94th Anniversary on Monday, March 26th. Especially since our club is the oldest in the Southeast United States. The room was full, the cake was delicious and the guests were great. What more could we ask for? Nothing could beat it!

The Optimist Clubs Sponsored the Golf Winner
The winner of the District Golf Outing was invited to play in the PGA Tournament in West Palm Beach. This is a special event and one that a young man would be proud to attend and participate in. The event is expensive and we wanted the winner to be able to take part in it. The clubs got together and donated funds for this to take place. Alex played against 75 young players in this tournament and came in 9th. This was quite an accomplishment for him. He stated he needs to work on this chipping. Look out Tiger Woods you have a competitor out there in the wings.

2019 Youth Appreciation Celebrated
We had the privilege of honoring a youth man who is only 13 years old. He has been helping our club over the last 3 to 4 years with the different projects we have put on. He always volunteered to help and never asked for anything. Malaki has a great talent and inventive mind. He likes to make games for others to play. He did that for our Spaghetti Dinner and the other clubs have used it too. Way to go Malaki, keep up volunteering.
Our club had the honor of  recognizing Angelica Nguyen on February 24th at Olive Garden for Youth Appreciation.
Angelica is quite a talented and energetic young lady. She is graduating from high school in June with a 4.4 grade average. She took college classes and also applied to several colleges and was accepted by all of them, she picked USF.
Angelica helps us out at the Tropiciana for the Ray's games and we can always count on her to be there. She works and was just promoted to a leader position. Angelica also teaches algebra twice a week to other kids. She is definitely an inspiration to others.
We are proud to honor this individual for her work in the community.
1